As the nation gears up for Republic Day celebrations, to applaud and showcase India as an economic power, we expose the other side of this rise to power – as thousands of steel plant workers are  brutally attacked by corporate goons on the eve of India’s completion of its 62nd year as a Republic. What does this say about the cost of India’s industrial growth?

We are extremely shocked and distressed over the barbaric inhuman violence on peaceful protesters especially women by the security guards and hired goons of Jindal steel plant in Angul, Odisha.  There has been series of at

tacks on unarmed peaceful protesters against forcibly land grab all over Odisha.  On 25th January 2012 when the entire Nation was gearing up for the Republic day celebrations and the Indian ruling classes, the big business and the corporate media was busy trumpeting the arrival of India’s major economical power house, the recurring brutal violence by the corporate goons on mass movements in ODISHA exposes the hollowness of our rulers claim of India being the world largest democracy.

2 around four thousand men and women went to Jindal Steel Plant, Angul to demand a justified compensation for the land forcibly grabbed from them and also to demand jobs which was promised to them both by the Company and Odisha Government. When the procession arrived in the factory security guard of the Jindal Steel Company and hired goons brutally attacked men and women especially women who were in the front against the struggle. The barbaric scene is difficult to explain to in words. In front of a large posse of police the hired goons in the security guards of Company attached them with iron rods and stick. Fatally injuring more than two hundred men and women, many of them are now admitted in SCB Medical College, Cuttack and different hospitals in Angul. Women were beaten ruthlessly with iron rods their cloths were torn, they were bleeding profusely, the bestiality of the goons reached most shocking and appalling limits when some of them inserted iron rods into the private parts of the women. There is nothing much to say after this about the great proclamation of Odisha Chief Minister about the so called great peaceful industrialization of Odisha.

When an FIR was lodged the local police station, none of the senior executive of the company including the CEO was arrested except the token arrest of the security officer. This incident is a horrifying indicator of the growing state and corporate attacks on peaceful mass movement of Odisha. In November 2011, the hired goons of POSCO in front of a large contingent of police men attacked the peaceful protesters of the Anti-POSCO struggle in Jagatsinghpru District Odisha, with bombs killing one an injuring many. 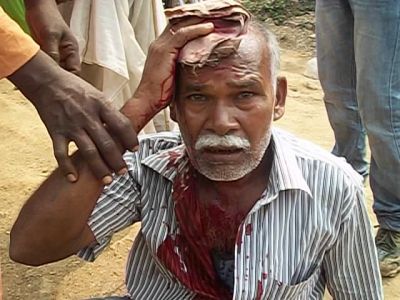 We strongly condemn this dastardly attack on peace protesters against Jindal Steel Company in Odisha, we demand immediate arrest of the CEO and other senior executive of Jindal Steel Plant registering criminal case against them for brutally attacking people injuring men and women. We demand the dismissal and trial of all the policemen, who was present during this inhuman shameful incident including SP of the district.

We appeal to all the progressive, democratic, Human Rights and Women’s Organizations to condemn the incidents and demand action against the culprits.

This entry was posted in Statements and tagged Odisha. Bookmark the permalink.

2 responses to “BRUTAL CORPORATE ATTACK ON PEACEFUL PROTESTERS IN ODISHA”