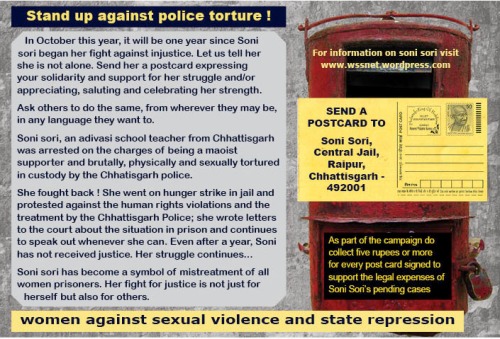 The time is NOW ! 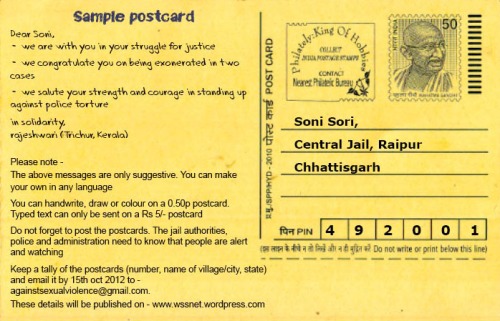 get a postcard, write your message, post it, mobilise others to do the same

On the occasion of the birth centenary of Shaheed Bhagat Singh, a post card campaign has been launched for people to express their solidarity with Soni Sori and her struggle for justice. WSS calls upon everyone to join in this campaign. Post cards were signed in Delhi, Bhopal and Indore today to launch the campaign.

Women Against Sexual Violence and State Repression (WSS) has launched a solidarity campaign for Soni Sori incarcerated in Raipur jail for the past one year under false charges of being a Maoist engaged in extortion and violence.

In two of the eight cases fabricated against her by the Dantewada police, Soni Sori has already been acquitted. In a third significant case in which she, her husband and her nephew Lingaram Kodopi are all charged and imprisoned,  the key eye witness, Avadhesh Gautam, has given vital testimony on 27th September 2012, confirming that none of these three were present at the incident site.  This corroborates what Soni Sori has been saying all this while, that the Chhattisgarh police have been foisting all these false cases against her and her family, merely in order to harass and punish them for refusing to obey the illegal diktats of the Chhattisgarh police. END_OF_DOCUMENT_TOKEN_TO_BE_REPLACED

People around the country have been battling the issue of displacement for decades. Corporate land acquisition and large scale infrastructure projects have taken the lands and livelihoods of thousands. In Madhya Pradesh, the struggle against displacement by large dams has been central to the people’s movement. It has been a long and difficult fight to compel the government to comply with its own rehabilitation policy, and the struggle continues…

Most recently, on the evening of 25th August, 2012, 250 people affected by the Omkareswar dam entered the water and began their landmark protest – the jal satyagraha. Below is a video of the protesters followed by a press release by the Narmada Bachao Andolan (NBA).