NCW Shamed into Reopening the Soni Sori Case After Gherao! 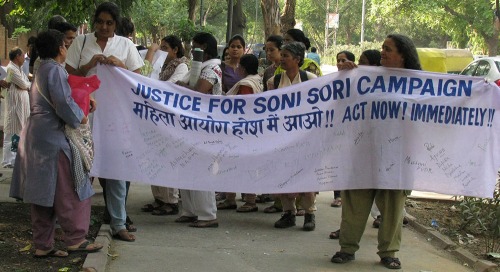 Today afternoon, activists from women’s groups and several peoples’ organisations stormed the National Commission for Women (NCW), protesting against the continued inaction for an year in the Soni Sori case. It has been one year since the arrest of 36-year old Soni Sori, an adivasi school warden from Dantewada, Chhattisgarh, and her custodial at the behest of the then SP of Dantewada, Ankit Garg. Soni Sori’s right to life and dignity have been violated by various jail and police authorities several times over – from foisting false cases against her, sexually torturing and humiliating her in the police station, denying her medical attention, and most recently, humiliating her by publicly stripping her in prison in the name of conducting physical search. It is also one year since women’s groups first met the NCW to seek their intervention.e

Since the first meeting last year, these organizations have approached the NCW on several occasions to take steps against Soni Sori’s custodial torture and continuing ill treatment. Every single instance of illegality by police and jail authorities was brought to the attention of the NCW. Soni Sori herself wrote to the NCW seeking their help. But all this has fallen on deaf ears.

On 27 September 2012, when the NCW was once again approached regarding this case by representatives of some women’s organisations, Hemlata Kheria, the Member-in-Charge of Chhattisgarh was not even aware of Soni Sori’s case. It took two hours for her file to be dug out, and it was then discovered that a reply of the Chhattisgarh police had been lying in the NCW office since 17 February. The NCW has neither taken cognizance of this reply, nor forwarded it to the complainants.

Today, to the shock and consternation of the protesting organizations, they were informed by another member secretary Charu Walikhanna that the Soni Sori case had been closed on 4 Oct 2012, that too once more without informing the complainants! Clearly, the NCW had satisfied itself by reading a “report” by the accused in the case, the Chhattisgarh Police. The closure report says, “at our end, nothing seems more to be done”. Various members of the NCW came up with frivolous excuses of not having the “power” to take up a case which is pending before a court. The activists were then forced to read out the provisions of the NCW Act, which give the commission the power to intervene or/and assist in any pending case.

After prolonged discussion, the NCW finally relented and has reopened the case. Also, the NCW has given in writing that within a week it will “consider intervention in the Supreme Court case” and carry out a fact-finding.

NCW has frequently denied reports of sexual violence by security forces in several parts of the country, instead of seeking to investigate and end impunity granted in such crimes. It’s apathy has been criminal – it refused to get involved in the Shopian case where Nilofer and Aasiya Jan were sexually assaulted and killed; it remained a mute spectator when the Chhattisgarh police whisked away Sodi Shambho, the crucial witness to Gompad massacre, from right under its nose in New Delhi to some place where she still remains untraced three years later; it is still to take any action on a 15-month old petition asking the NCW to investigate the human rights violation of Irom Sharmila, who is being illegally detained by the Government.

The protesting groups today also pointed out that Members and Chairpersons of the NCW are chosen not by virtue of their involvement in and championship of women’s rights and struggles, but by their participation in and patronage by the ruling political parties.

This entry was posted in Press Releases and tagged Soni Sori, women prisoners. Bookmark the permalink.