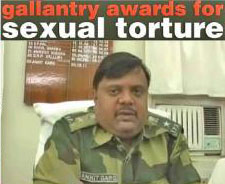 On 26th January last year, IPS officer Ankit Garg who was charged with sexual assault of Soni Sori, was conferred the President’s Police Medal of Gallantry. Conferring this award amounts not only to condoning the sexual torture inflicted on Ms Sori and the violence which is being perpetrated in the name of anti-Naxal operations, but actually encouraging it. Today, when the nation’s conscience is stirred by heinous sexual crimes committed against women and the government is promising zero tolerance for sexual crimes, what signal does a gallantry award to Ankit Garg give?  At best it means that even the President’s office does not take too seriously the complaint of sexual assault of an adivasi woman, even after it has been independently verified by some of the nation’s best medical practitioners.  At worst, it signifies that some sexual assaults are not only tolerated by the government, but also decorated.

A year on, the campaign to withdraw the medal continues. Below is a letter to the President of India, demanding for its withdrawal together with a signature campaign. Read on and join in!

END_OF_DOCUMENT_TOKEN_TO_BE_REPLACED

The National Commission on Women (NCW) is mandated to ‘investigate and examine all matters relating to the safeguards provided for women under the Constitution and other laws’, ‘ and ‘take suo moto notice of matters relating to deprivation of women’s rights’. Soni Sori turned to them for support. As early as 10th October, 2011, several women’s groups and activists too, called upon the NCW to take action in Soni’s case. Many visits and appeals later, it became clear that their pleas were falling upon deaf ears.

On the 10th of October, 2012, around a hundred women and student activists stormed the NCW office on Delhi’s Deen Dayal Upadhayay Marg, protesting against its year-long inaction.

Video of the protest by women’s groups and activists as they storm the NCW office, demanding action

END_OF_DOCUMENT_TOKEN_TO_BE_REPLACED

Represenation to the Justice Verma Commission

The Justice Verma Commission constituted in the wake of the Delhi gang-rape to provide recommendations to the government for amending existing laws for ensuring speedier trials and enhanced punishment in cases of crimes against women, has interpreted its terms of reference widely to include connected areas such as gender justice, respect towards womanhood, and ancillary matters. In response to the Commission’s call to the public for suggestions, WSS has submitted the following recommendations which can be accessed as a pdf or in the following post.

WSS notes with concern that the entire public debate arising out of the recent Delhi gang rape incident has centered round the issues of “enacting a strong law” and “prescribing harsher sentence.” It has failed to recognize more basic issues – the enormous social obstacles encountered in registering complaints, in the conduct of thorough investigation, in the protection of witnesses, in fast and efficacious prosecution and in unbiased adjudication – in other words, the issues of implementation of the law, and the functioning of the police and judicial machinery – which necessarily precede sentencing. The debate has also largely failed to take into account the deeply patriarchal character of our social institutions, and law enforcement machinery which render women vulnerable to violence in the family, in the larger community, in their work places and public places. END_OF_DOCUMENT_TOKEN_TO_BE_REPLACED