The National Commission on Women (NCW) is mandated to ‘investigate and examine all matters relating to the safeguards provided for women under the Constitution and other laws’, ‘ and ‘take suo moto notice of matters relating to deprivation of women’s rights’. Soni Sori turned to them for support. As early as 10th October, 2011, several women’s groups and activists too, called upon the NCW to take action in Soni’s case. Many visits and appeals later, it became clear that their pleas were falling upon deaf ears.

On the 10th of October, 2012, around a hundred women and student activists stormed the NCW office on Delhi’s Deen Dayal Upadhayay Marg, protesting against its year-long inaction.

Video of the protest by women’s groups and activists as they storm the NCW office, demanding action

On the 4th of October 2011, Soni Sori a 36-year old adivasi school warden from Dantewada, Chhattisgarh was arrested on false charges of being a Maoist supporter and taken into custody by the Chhattisgarh police, by whom she was brutally tortured and sexually assaulted. Over the past year, her right to life and dignity has been repeatedly violated by jail and police authorities. She has been consistently humiliated and denied medical attention. Today, despite the efforts of various individuals, activists and women’s groups, Soni has received no justice. No action has been taken against the Chhattisgarh police. Instead, Ankit Garg, the SP of Dantewada under whose behest Soni Sori was subjected to sexual violence and torture, was awarded the President’s Police Medal for Gallantry.

Soni, however, continues her brave fight against injustice. In an open letter to social workers, activists, the women’s commission and the citizens of India, Soni Sori poignantly asks ‘…by giving me current, by stripping me naked, or by brutally assaulting me [and] inserting stones in my rectum, will the problem of Naxalism end? Why so many atrocities on women?’ Wondering whose support she could seek out in her fight for justice she asks ‘Whom should I have called? It was the courts, themselves, who handed me over to the police’

Given that the National Commission on Women (NCW) is mandated to ‘investigate and examine all matters relating to the safeguards provided for women under the Constitution and other laws’, ‘ and ‘take suo moto notice of matters relating to deprivation of women’s rights’, one would assume that Soni could turn to them for support, as she rightly has. As early as 10th October, 2011, several women’s groups and activists too, called upon the NCW to take action in Soni’s case. Many visits and appeals later, it became clear that their pleas were falling upon deaf ears.

On the 27th of September 2012, representatives of some women’s organisations once again approached the NCW regarding Soni Sori’s case. Despite the fact that the NCW had ordered an inquiry with the Chhattisgarh Police, Hemlata Kheria, Member-in-Charge of Chhattisgarh, was not even aware of Sori’s case. It took two hours for her file to be dug out. The file contained a reply of the Chhattisgarh police dated 17th February, 2012. The NCW had neither taken cognizance of this reply, nor forwarded it to the complainants.

A fortnight later, on the 10th of October, 2012, around a hundred women and student activists stormed the NCW office on Delhi’s Deen Dayal Upadhayay Marg, protesting against its year-long inaction. Meeting with the protestors, NCW member secretary Charu Walikhanna informed the group that Soni Sori’s case had been closed by the NCW on the 4th of October, 2012, saying that “since this matter is sub judice in the Supreme Court, it will not be proper for us to intervene.” Their closure report stated that ‘at our end, nothing seems more to be done.’ Once again, the NCW had not bothered to convey its decision to the complainants. Had a simple ‘report’ from the accused in the case – the Chhattisgarh Police – sufficed to convince the NCW of their innocence? Could it have served as grounds enough for the apex national level organization instituted to protect and promote the interests of women, to close down a case of reported torture and sexual violence by a woman prisoner?

We are compelled then to ask whether the NCW is effectively addressing the issues for which it had been created and upholding the rights of those whose interests it is supposed to protect. The NCW, established in 1992 under the provisions of the 1990 National Commission for Women Act, was set up to monitor, scrutinize and influence state policies – a body that was located inside the government and yet independent of it – giving it in the dual responsibility of being a watchdog body that constantly scrutinizes and checks anti-people policies of the state and also one that positively helps to develop capacities within the government to address the issues of the marginalized from the rights and justice perspective. The creation of the NCW was the result of the pressure of a vibrant women’s movement which began in the 1970s that gave visibility to women’s issues and changed the state’s perspectives on women’s roles and participation. Given its history and intent, one would assume that the NCW should be expected to play a pro-active role in the struggles of women, and do so by influencing state policies and institutions. But to what extent is any of this being done? To what extent is the NCW accomplishing what it set out to do? Is it exercising its power to ‘call for special studies or investigations into specific problems or situations arising out of discrimination and atrocities against women’? To ‘take up the cases of violation of the provisions of the Constitution and of other laws relating to women with the appropriate authorities’? To what extent is it able to bring in changes in the culture and practices of bureaucratic structures of the state?

In the case of Soni Sori, none of this was done. Despite being empowered to conduct independent fact-findings, to visit jails and remand homes, to submit their reports in court, to summon witnesses and examine them, and to hold public hearings, the NCW did not utilize any of these extensive powers to look into the serious complaints of Soni Sori who has been imprisoned and tortured. It made no attempt to contact her when she was hospitalized in Delhi for over a month, or help women’s groups reach her in jail.

But this isn’t the first time that the NCW has failed to execute its sworn duty. It has repeatedly and frequently denied reports of sexual violence by security forces in several parts of the country, instead of seeking to investigate and end the impunity granted in such crimes. It refused to get involved in the Shopian case where Nilofer and Aasiya Jan were sexually assaulted and killed; it remained a mute spectator to the whisking away of Sodi Shambho, the crucial witness to Gompad massacre, by the Chhattisgarh police; it has yet to take action on a 15-month old petition for an investigation into the human rights violation of Irom Sharmila, who is being illegally detained by the Government. When the women of Koodankulam were brutally assaulted by the police for fighting for their rights, the NCW looked the other way. In Khairlanji, as a Dalit mother and daughter were stripped naked, dragged from their hut and hacked to death by the dominant castes of their village, the silence of the NCW resounded through the nations ears. 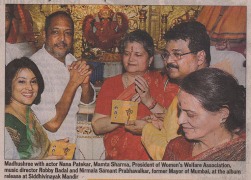 Achievements of the NCW: a news clipping from the NCW website showing Chairperson Mamta Sharma at the launch of an album of devotional songs for Lord Ganesha

The conduct of the Commission over the years has obscured the systemic injustices inflicted on women, trivialized the violations, and reduced the dignity of the institution itself. It isn’t simply on account of inaction that the NCW has failed us. Several controversial positions have reflected the Commission’s lack of understanding of women’s issues. Advising victims of sexual assault to dress “carefully” to avoid sexual violence and calling upon women to graciously accept the term ‘sexy’, members of the commission have repeatedly revealed their anti-women prejudices and patriarchal outlook.

Probing the appointment of the Chairperson and members of the Commission puts some of these remarks in context. Rather than being chosen by virtue of their involvement in the women’s movement and their championship of women’s rights, the appointment of the Chairperson and members of the NCW has been largely influenced by political considerations. Over the years, several have been nominees of the government in power with no history of working on women’s issues. As a result, they have not only lacked the experience and necessary expertise for the job, but also the perspectives needed for processes of social change. The political nature of the appointments has affected the autonomous functioning of the Commission and has compromised their ability to act against those in power.

After a prolonged discussion on October 10th, 2012, once the protesting activists pointed out the provisions of the NCW Act which empowers the Commission to intervene and/or assist in any pending case, members of the Commission finally relented and agreed to reopen Soni Sori’s case. However, our experience of dealing with the NCW, together with the experience of countless women over the years, has compelled us to ask some fundamental questions of the Commissions members and its mode of functioning. At a time when we are faced with an unprecedented number of incidents of State repression and sexual violence against women, the need for an autonomous and effective statutory body that protects the interests of women is stronger than ever before. It is most distressing that at a time like this, the National Commission on Women has become inert, ineffective and incompetent.
The WSS, together with other organizations and voices of resistance, refuses to let the NCW lightly explain away its inactivity and shrug its duties. We demand accountability and action.

The protest on October 10, 2012 resulted in the formulation of the following demands:
• Immediate resignation of the present Chairperson and other Members
• Re-constitution of the Commission in an open and transparent manner
• Immediate enquiry into the custodial torture of Soni Sori
• Initiation of investigations into conditions of women prisoners in Chhattisgarh
• Performance audit of the NCW by an independent panel

This entry was posted in Uncategorized and tagged Chhattisgarh, Soni Sori, women prisoners. Bookmark the permalink.