Land, Caste and Sexual Violence Against Dalit Girls and Women in Haryana – A report by WSS

“Speak! The Truth Is Still Alive” is an effort to expose and analyse the continuing onslaught of sexual violence against the Dalit girls and women in the state of Haryana in North India. This report i s based on a series of visits by WSS members to village 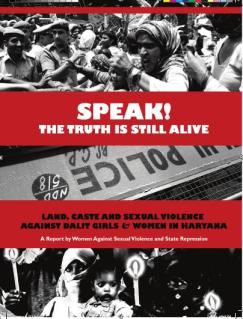 s in the districts of Rohtak, Hisar, Jind, Karnal and Kurukshetra, and interviews with some survivors and their families. WSS holds that it is incumbent on feminists, women’s movements and democratic rights movements to join Dalit movements and Dalit feminists in confronting and questioning the apathy and silence that shrouds the issue of sexual violence against Dalit women in Haryana. This report seeks to bring some of the most recent of these violations under scrutiny, to expose the institutional mechanisms that provide immunity and impunity to perpetrators, and collude with them to attack and intimidate those who are struggling for justice. Click here to read the report.