A team of human rights activists from Solidarity Committee for Brick Kiln Workers of Telangana State, Human Rights Forum, and Women Against Sexual Violence and State Repression, as well as professors and students from University of Hyderabad, visited Hanumantunipeta village in Pedhapally block of Karimnagar district today, to conduct a fact finding on the death of Surja Bag, a pregnant woman brick kiln worker from Orissa. Her husband, Jitendra Bag had filed a complaint at the police station stating that she had been lethally kicked by the owner of the brick kiln and the supervisors when she had been unable to work due to high fever. The FIR filed cites S. 304-II and the owner of the kiln, Shyam, and 3 supervisors have been taken into remand on these charges.

Surja Bag was four months pregnant and had developed a fever on December 1, 2015. The workers in the kiln typically start working at 3 a.m. and while most of them were at the worksite, Surja Bag was in the small sheds where workers are housed. Her husband states that the supervisors beat her and that she started bleeding after being kicked in the stomach. After she fell unconscious, she was not taken to the hospital. Instead an RMP doctor who tends to workers on the site at the behest of the kiln owner, came and administered a saline drip. She died by the time he administered the second saline drip, around 9:30 a.m.

Workers at the kiln had all typically taken an advance of around Rs. 15,000 to Rs. 17,000 from the owner of the kiln or his agents in Orissa. They are then brought to brick kilns for a seven month period from November to May, to work off their debt. They are not aware of which kiln or even which state they will be transported to for this work. In this kiln they worked from 3 a.m. till 10 a.m. and resumed from 4 p.m. to midnight. Each person who manufactures bricks will have to produce 3 lakhs of bricks during the season. During the season they were paid only Rs. 250 per week for all their local expenses including food – this is insufficient even as a daily wage. Surja Bag worked as a brick loader. Her husband and many of the other brick loaders left the kiln to return home to Orissa after filing the complaint. The government has released a cheque to Jitendra Bag for Rs. 50,000 by way of compensation and Rs. 20,000 for cremation charges.

However, around 260 brick makers in the kiln remain stranded without food, money or work, in the kiln, including about 60 small children. They are living in great fear of another attack. They have no means of transport nor money to return to Orissa and so the fact finding team has petitioned the RDO’s office to release these workers and enable their safe transport upto their hometown. As per the Bonded Labour Act (1976) they should be provided with safe transport and Rs. 1000 towards travel and food, and they should be issued Bonded Labour Certificates.

We also demand that the license of this brick kiln owner be canceled. One year ago, the bodies of two male brick kiln workers from this same kiln were found floating in a canal. That death was recorded as a suspicious death but workers at the kiln state that they were killed when they were trying to run away from the kiln. In addition to this local activists say that the soil and coal for the bricks are sourced from illegal mining. They state that soil from Mission Kakatiya intended for agricultural use are being diverted here, and the kiln has been established illegally on this land. The pollution from the kiln’s activities is also violating norms and affecting agricultural productivity in nearby farms, according to the activists.

The entire brick kiln industry is founded, like all other industries, on exploitation of labour. In addition, these workers being migrant workers, suffer from a lack of access to any facilities such as healthcare, education for their children, proper housing, toilets and access to water. These should all be provided to them by the brick kiln worker as per the Interstate Migrant Worker Act (1979). The workers are trafficked to locations they are unaware of, so that if they protest against unfair labour conditions, they have no connection to any local support. Finally, this bonded labour system of extracting unbounded work to pay off loans, is predicated on the use of coercion and force to intimidate workers into submission. Such bonded labour is not even interpreted as such by the RDO’s office, nor are they willing to issue bonded labour certificates, because they claim there is no written contract to prove the system. These days all bonded labour systems are maintained without a contract precisely so that they can escape from the provisions of the Act. Surja Bag’s death is due to the unfettered existence of such institutions.

The representation submitted to the RDO and some photos are attached. 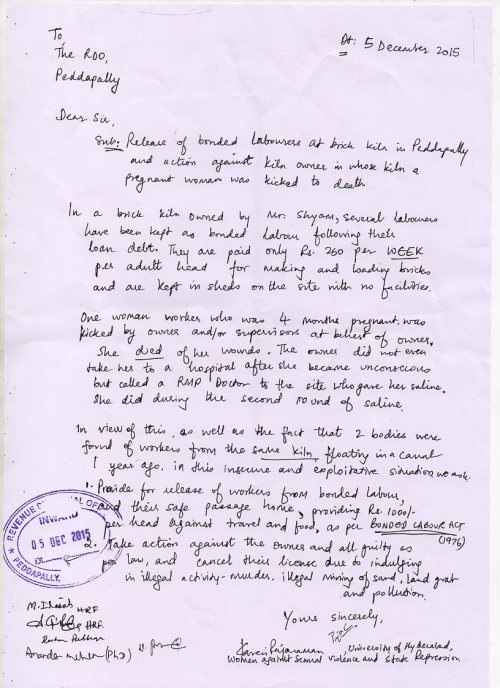 This entry was posted in Reports and tagged bonded labour, Telangana. Bookmark the permalink.