A Report of the WSS National Seminar Resisting Caste and Patriarchy: Building Alliances

The inspiration for the seminar “Resisting Caste and Patriarchy : Building Alliances” came from an initiative that started in 2013-2014, when members of WSS made a series of visits to villages in several districts of Haryana to investigate reports of sexual assaults and killings of Dalit girls. The team met and interviewed many of the survivors and their families. Intensive discussions with a team of young Dalit lawyers and activists provided additional insights into the situation. In the course of internal discussions that followed, members of WSS tried to articulate the gaps and grey areas in feminist debates on caste and patriarchy, and draw on lessons from the histories of engagement with questions of caste and gender by and within different mass movements and women’s movements. 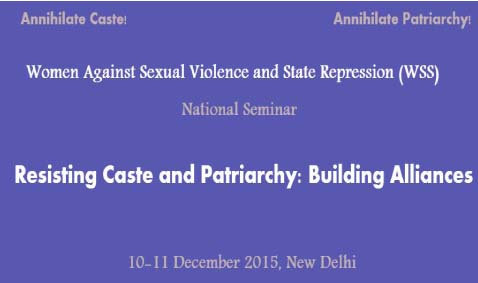 It was obvious that the disappearance of “annihilation of caste” from the agenda of contemporary movements was an inevitable consequence of the marginalisation of Dalit women in political struggles and social processes. Thus, complex issues arising from Dalit women’s labour in various relations of production have been reduced to the question of choice or coercion in sex work, with little exploration of the ways in which caste, class and patriarchy have worked together to exploit and stigmatise dalit women across the spectrum of work and labour relations.

Progressive groups and social movements across the spectrum are struggling with uncertainty and lack of clarity on advancing the agenda of annihilation of caste in the context of changing land and labour relations, neo-liberal capitalism, the appropriation of natural resources, increasing state violence and the dominance of Hindutva. The decision to organise a national seminar around these issues was taken at the WSS annual meeting in Lucknow in 2015.

The main objective of organising this National Seminar on Caste and Patriarchy was to strengthen our dialogues and alliances around Babasaheb Ambedkar’s foundational insight – that the annihilation of caste cannot be fulfilled without the annihilation of patriarchy. The objective was also to explore the question of how our struggles against patriarchy, caste and religious orthodoxy could draw from Ambedkar’s legacy to redefine feminism in the Indian context. Our effort was to create a space to explore and discuss questions around re-framing our perspectives on the intersections of caste and patriarchy with structural inequalities so as to take on the challenge of annihilation of caste.

This entry was posted in Reports and tagged caste, Delhi NCR, patriarchy. Bookmark the permalink.