“My struggle will continue until AFSPA is struck down” – Irom Sharmila 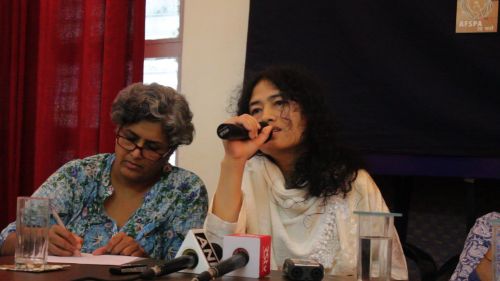 “My struggle will continue until AFSPA is struck down” said Irom Sharmila Chanu, the poet and activist from Manipur whose 16-year long hunger strike against the Armed Forces Special Powers Act has made her a global symbol of non-violent resistance. Sharmila was speaking at a press conference organised by the “Stand With Irom Sharmila: Repeal AFSPA” Campaign, a global campaign endorsed by nearly 1000 women – from pioneers of global women’s movements to grassroot activists who have dedicated their lives to the struggle for women’s rights and freedoms.

Addressing a gathering that listened in rapt attention, Sharmila re-asserted that draconian laws like AFSPA have no place in a democracy. Responding to the question of what her next political steps could be, Sharmila stated that “her first step has been to break out of the isolation imposed upon her by the State and now she is taking her campaign against AFSPA out to the people. It is not a matter of “I” now but of becoming a “we” a collective movement.” Sharmila located her battle against AFSPA within her larger vision of working towards a political system that is clean and transparent, and governance based on equal respect for the multi-culturalism in India, irrespective of the belief systems of those in power. When asked how relevant she thought the demand to repeal AFSPA is in the current political context of the hostilities on the border, Sharmila was unshaken in her belief in the power of non-violence. “If I was the Prime Minister of India, I would ask the country to think with a cool mind. After all, the people of both countries have friends and relatives on both sides, Hindus and Muslims are on both sides, so negotiation and dialogue should definitely come before any retaliation.”

The Armed Forces Special Powers Act (AFSPA) is a colonial law first promulgated by the British rulers of India in 1942 to try and quell the freedom struggle. It has been continuously operative in several north-eastern states, including Sharmila’s home state of Manipur since 1958. It was also invoked in Jammu and Kashmir in 1990. Under this law, armed forces and other security forces in “disturbed areas” have the license to shoot to kill anyone on suspicion; make arrests without warrants; enter and search any home or establishment; detain and question anyone. Armed forces personnel and security forces have complete immunity for actions taken under this law, and their prosecution requires prior sanction of the government, under Section 6 of the AFSPA. RTI information has disclosed that Sanction for prosecution of armed forces even for egregious human rights violation has never been granted. Nor is the government’s decision on declaring an area “disturbed” subject to judicial review.

There is a long history of struggle against the AFSPA by ordinary people in all the areas where the Act has been imposed. Women directly affected by the impunity spawned by AFSPA have come on to the streets repeatedly to demand justice for the women and girls who have been assaulted, raped and murdered in states where AFSPA is in force. In 2004, a group of Meira Paibis the famous torch-bearing mothers of Manipur, stripped naked and stood in front of the then army headquarters Kangla Fort, holding a banner saying “Indian Army, Rape Us”, turning the very bodies of women that are targeted, into a powerful symbol of protest. Yet the State remained unmoved.
In a historic judgement on 8 July 2016 regarding 1528 encounter deaths in Manipur that has been under AFSPA for about 60 years, the Supreme Court declared ‘indefinite AFSPA’ a mockery of democratic processes. Over the years, the Justice Jeevan Reddy Committee; Christof Heynes, UN Special Rapporteur on Extrajudicial, Summary or Arbitrary Executions; Rashida Manjoo, UN Special Rapporteur on the Causes and Consequences of Violence Against Women, Margaret Sekaggya, UN Special Rapporteur on Situation of Human Rights Defenders; the UN CEDAW Committee; former NHRC member, Satyabrata Pal; the Working Group on Human Rights in India and the UN (WGHR); global human rights bodies and civil society organisations have consistently called for a repeal of AFSPA and an end to immunity for crimes committed under its shadow.

Speaking at the event, Sharmila, who started her fast in November 2002, reflected on her struggle and shared her frustration and despair at the refusal of successive governments to recognise her fast as a political act of satyagraha. She said that her decision to end her fast on 9 August 2016 has freed her from the forced isolation she has been subjected to all these years, and allowed her to take her protest into the larger public arena. She reiterated her simple question: How can a country that prides itself on being the world’s largest democracy continue to implement a law that violates every tenet of democracy? Sharmila said that she would like to put this question directly to the President of India. She has sought an appointment with the President, to hand over the campaign appeal and signatures in support, and urge him to act to repeal AFSPA.

Addressing the press, eminent feminist historian and women’s rights activist, Uma Chakravarti said, “No one should be above the law, no acts of the state should be above judicial scrutiny and judicial redress. That’s why we stand with Sharmila to repeal AFSPA and are taking the global women’s campaign to the President.”

Vrinda Grover, human rights lawyer and feminist, added “The prolonged application of AFSPA has not only institutionalized militarism and a climate of impunity but has also alienated the public and fuelled a cycle of violence, increasing insurgency rather than dampening it.”

Annie Raja, General Secretary of the NFIW, reiterated that the CPI has consistently stood by Sharmila given their long standing opposition to the unconstitutionality of AFSPA. She also clarified further that “they welcomed Sharmila’s decision to participate in politics and that their solidarity to her struggle is irrespective of her electoral choices.”

WOMEN OF THE WORLD STAND WITH SHARMILA TO REPEAL AFSPA

The campaign has also been endorsed by leading Indian feminist activists and human rights defenders including Parveena Ahangar, founder of the Association of Parents of Disappeared Persons; Rashidabi of the Bhopal Gas Peedit Sangharsh Sahyog Samiti; Aruna Roy of Mazdoor Kisan Shakti Sangathan, the Right to Information Campaign and the Right to Food Campaign, Annie Raja of the National Federation of Indian Women (NFIW) and Brinda Karat of the All-India Democratic Women’s Association (AIDWA) Syeda Hameed, formerly of the Planning Commission; Lalita Ramdas from the Campaign for Nuclear Disarmament and Peace; Advocates Indira Jaising and Vrinda Grover, feminist lawyers and human rights defenders; Ruth Manorama, Prof Vimal Thorat, Lata PM and Rajni Tilak, prominent Dalit feminist activists; artist Neelima Sheikh and musician Vidya Rao; journalists Pamela Philipose and Geeta Seshu along with hundreds of others – academicians, students, media persons, lawyers, development professionals and activists determined to stand up and assert our Constitutional rights to life and liberty that are consistently violated under the AFSPA!

We urge the President of India to respond to this international call for justice, peace and accountability. 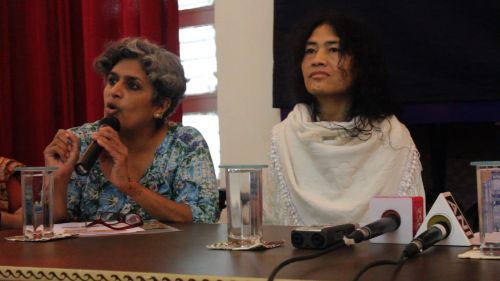 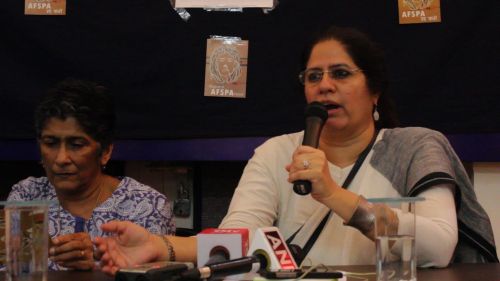