Women Against Sexual Violence and State Repression (WSS), a nationwide network of women who oppose and resist state repression and sexual violence against women and girls, strongly condemns your government’s anti-people, anti-democratic actions in unleashing state terror against the struggling people of Bhangor.

Madam, your misuse of state power to crush a people’s movement is even more ironic, given that you came into power on the promise of a pro-people, democratic government. Instead, in the eight years of your rule, your government has grown ever more autocratic and anti-people. END_OF_DOCUMENT_TOKEN_TO_BE_REPLACED

Towering Resistance: A Report on the Bhangar Movement Against the Power Grid

A 12 member team of WSS visited Bhangar in early March, 2017, and met with affected villagers and concerned officials, in order to understand the origins and impetus behind the massive resistance movement against the power grid project being undertaken by Power Grid Corporation of India (PGCIL). This report is based on our visit to the area, public documents and media reports from the area.

You can access the full report at the following link : TOWERING RESISTANCE

Grand Rally at College Square, Kolkata to Demand Release of Sharmistha Chowdhury And All Other Prisoners Of Bhangar Movement 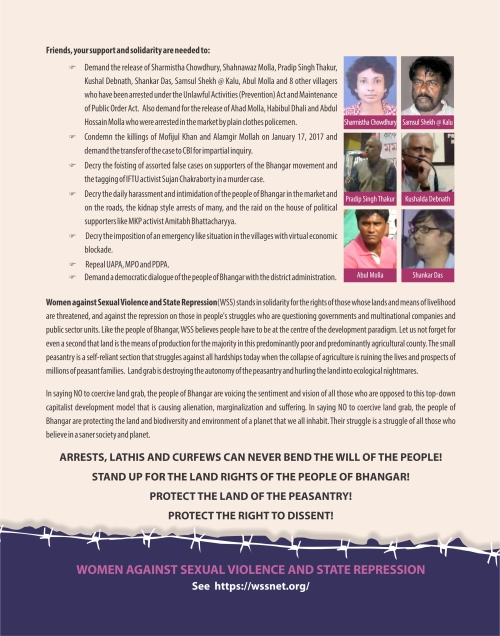 WSS Statement on State Repression on the Anti-Land-Grab Movement in Bhangar, West Bengal

CONDEMN STATE REPRESSION AND ARBITRAY ARRRESTS OF THE WEST BENGAL GOVERNMENT
SUPPORT THE ANTI-LAND GRAB MOVEMENT OF THE PEOPLE OF BHANGAR, SOUTH 24 PARGANAS

A NOTE BY WOMEN AGAINST SEXUAL VIOLENCE AND STATE REPRESSION (WSS)

WSS stands with the struggling people of Bhangar against the severe repression unleashed by the state in order to establish a power grid and high power transmission lines across the area by force. In the course of this struggle: