WSS is appalled at the arrest of Father Stan Swamy, an elderly Jesuit priest working on adivasi issues for the past 5 decades in the infamous Bhima Koregaon – Elgar Parishad conspiracy case on the night of 8 October, 2020. WSS condemns this most recent arrest of a sterling activist and a reputed authority, and calls out the sheer absurdity of charges against this kindly and gentle soul. We note that the investigation into Bhima Koregaon violence on 1st Jan 2018 has turned into a farcical witch-hunt against the leading human rights activists in the country, in which 15 other lawyers, activists, writers, poets, intellectuals and activists of renown have already been imprisoned under similarly ludicrous charges, some for over two years.

END_OF_DOCUMENT_TOKEN_TO_BE_REPLACED

The Nava Peshwai Terror against the Dalits and State Repression

WSS condemns the wave of state repression following the peaceful commemoration of the Ambedkarite community on the 200th anniversary of the battle of Bhima Koregaon. The most recent wave of repression is a set of raids without a warrant conducted simultaneously at 6 am on 17 April, 2018, upon the homes of Kabir Kala Manch activists Rupali Jadhav, Jyoti Jagtap, Ramesh Gaichor, Sagar Gorkhe and Dhawala Dhengle in Pune; Republican Panther activists Sudhir Dhavale and Harshali Potdar in Mumbai; and Nagpur-based lawyer Surendra Gadling and Delhi-based CRPP activist Rona Wilson. Rupali and Jyoti are also members of WSS and staunch feminist activists. END_OF_DOCUMENT_TOKEN_TO_BE_REPLACED

When equality is denied everything is denied

On the 13th of March 2017, Muthukrishnan Jeevanathnan also known as Rajini Krish, a Dalit research scholar in JNU committed suicide by hanging himself. His death and his writings when he was alive all speak to the nature of caste based discrimination faced by dalit scholars all over the country in various educational institutes. Despite his articulation we hear a repeated assertion of old tropes of Dalit scholars not being able to ‘cope up’ with the pressure at Universities.

It is only a little over a year after RohithVemula was found hanging in a hostel room in the University of Hyderabad, that now another young student, Muthu, of Jawaharlal Nehru University has been found hanging in a room of a friend. Muthu too struggled to enter esteemed institutions of higher education, far from his native home, with the hope of changing a destiny written by a Brahmanical caste ridden history. He was a cheerful presence at all the protests against Brahmanisim at the University of Hyderabad, but he was primarily focused on getting admission in JNU. Muthu was well aware of the weight of historical deprivation that students like him carried when they entered such institutions. A student of modern Indian history, his efforts appear to have been to make sense of this past, recognise its manifestations and find ways of addressing it.  END_OF_DOCUMENT_TOKEN_TO_BE_REPLACED

Land, Caste and Sexual Violence Against Dalit Girls and Women in Haryana – A report by WSS

“Speak! The Truth Is Still Alive” is an effort to expose and analyse the continuing onslaught of sexual violence against the Dalit girls and women in the state of Haryana in North India. This report i s based on a series of visits by WSS members to village 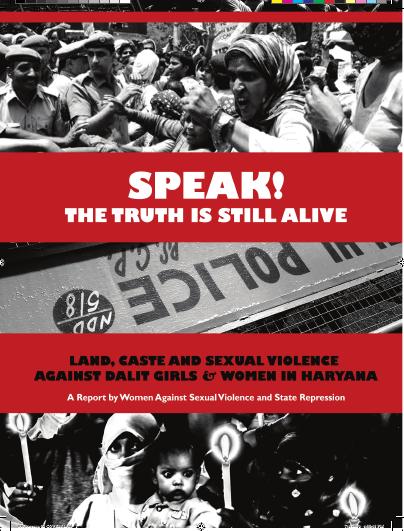 s in the districts of Rohtak, Hisar, Jind, Karnal and Kurukshetra, and interviews with some survivors and their families. WSS holds that it is incumbent on feminists, women’s movements and democratic rights movements to join Dalit movements and Dalit feminists in confronting and questioning the apathy and silence that shrouds the issue of sexual violence against Dalit women in Haryana. This report seeks to bring some of the most recent of these violations under scrutiny, to expose the institutional mechanisms that provide immunity and impunity to perpetrators, and collude with them to attack and intimidate those who are struggling for justice. Click here to read the report.

A Status Report on Bhagana by AFDR, PUDR and WSS 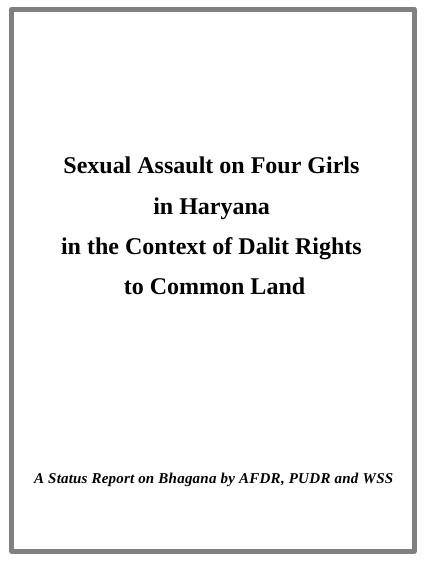 Repression (WSS) from Delhi visited Bhagana village of Hisar district on May 13, 2014. The main purpose of this visit was to meet the villagers after the gruesome gang rape incident of the four Dalit girls earlier on March 23 by five men of the Jat community and to understand its links with the ongoing struggle that the Dalit community has been waging since May 2012 for access to common land. You can access the report here.