Two teenaged adivasi girls from Bastar take on the state in their fight against extra-judicial killings. A Public Interest Litigation challenging the spate of encounters in Bijapur was filed last year before the Chhattisgarh High Court in Bilaspur by two young women from Korcholi with extra-ordinary grit and determination –Suneeta Pottam (19 years old).and Munni Pottam (18 years old). A national women’s organization, the WSS (wssnet.org) is the third petitioner in this case. Faced with a dozen affidavits of the villagers whose family members were killed, the High Court of Bilaspur held that the questions of extra judicial executions and government policies which are responsible for these are similar in spirit to the issues raised by the Salwa Judum petition (Nandini Sundar and Ors vs. State of Chhattisgarh), currently being heard by the Supreme Court. Following which, the young Petitioners filed a Transfer Petition in the Supreme Court last year seeking the transfer of their PIL to the Supreme Court. Suneeta and Munni Pottam are in Delhi to attend the hearing of their transfer petition on Wednesday, 10 January 2018.

At the press conference these young women spoke about these cases of encounters along with the details of the very recent physical and sexual assault of the the women of the villages where Suneeta and Munni live. They also spoke about the harrassment and threats that they have been receiving by the Bastar police (as recent as few weeks back) as result of filing this petition, who have threatened them that if they keep raising these issues which show the police in a bad light, they would be arrested for Naxalite offences and thrown into jail. Shaken but not defeated, these young women have come to Delhi to put their continuous harassment on record before the apex court at the coming hearing. END_OF_DOCUMENT_TOKEN_TO_BE_REPLACED

‘Gavahi’ – A WSS Book on Sexual Violence in South Chhattisgarh 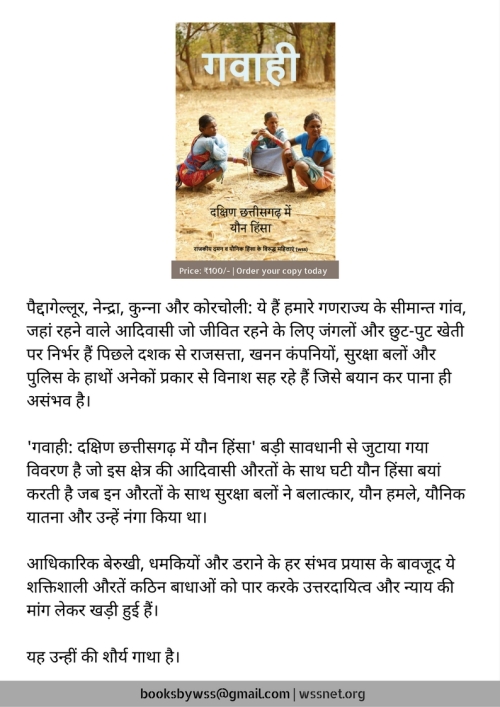 This book is a comprehensive compilation of the incidents of sexual violence in South Chhattisgarh, drawing on independent investigations or joint fact findings by WSS.

Pre-order your copy by writing to booksbywss@gmail.com

Ambedkar University, Delhi and Women Against Sexual Violence and State Repression invite you to observe and commemorate the Kashmiri Women’s Day of Resistance and the horrific mass sexual violence unleashed by the Indian Army against the villagers of Kunan and Poshpora, Kashmir.

On a cold February night in 1991, a group of soldiers and officers of the 4th Rajputana Rifles regiment of the Indian army entered two villages of Kunan and Poshpora in the remote district of Kupwara in Kashmir. The army claimed it was conducting ‘search and interrogation’ operations seeking out armed militants presumed to be hiding there. Instead, they pulled the men in the village out of their homes, subjected them to severe torture, including sexual assault and humiliation, and detained them all night. The women of the two villages were brutally gang-raped at gun-point; several women were sexually assaulted and stripped, and then left for dead in their own homes. The men were released in the morning and returned home to find the women raped and brutalized by the Indian army. Twenty-six years later, the memory of this mass rape, torture and humiliation by the men in uniform lingers in the valley. “Kunan Poshpora” and the day of the 23rd February has since become a symbol across Kashmir and beyond of women’s resistance to the militarization of this region by the State. Moreover, Kashmir was brought under the purview of the Armed Forces Special Powers Act (AFSPA) in 1990, after it had been in operation in several North Eastern States since 1958. Under this law, armed forces and other security forces in “disturbed areas” have the license to shoot to kill anyone on suspicion; make arrests without warrants; enter and search any home or establishment; detain and question anyone. Armed forces personnel and security forces have complete immunity for actions taken under this law, and their prosecution requires prior sanction of the government. RTI information has disclosed that Sanction for prosecution of armed forces even for egregious human rights violation has never been granted. END_OF_DOCUMENT_TOKEN_TO_BE_REPLACED

WSS welcomes the decisive intervention of the National Human Rights Commission in cases of sexual violence against Adivasi women by police and security forces engaged in anti-­Maoist operations in Chhattisgarh. Validating our assertion that sexual violence is being used as a weapon of war in Bastar, the Commission has held the State government “vicariously liable” for gross violations of human rights.

Taking cognizance of press reports based on WSS fact­-findings and successive complaints submitted by us, the NHRC conducted its own field investigation in March 2016, meeting and recording the statements of 16 women. In its strongly-­worded note issued today, the Commission has prima facie validated their FIRs of rape, sexual assault and physical violence. Statements are awaited from 20 more women who have also filed FIRs of sexual violence ranging from mass rapes to sexual assault of minor girls and pregnant women. END_OF_DOCUMENT_TOKEN_TO_BE_REPLACED

Women against Sexual Violence and State Repression (WSS) is deeply anguished by the incident of sexual harassment of a Gwalior additional district judge by a judge of the Madhya Pradesh High Court which came to light on 4th August 2014 and is outraged by the fact that the complainant has had to resign from her job in the face of continuous persecution by the High Court judge in question (who was the administrative judge of her district) and the conspiracy of silence of his brother judges, including the Chief Justice of Madhya Pradesh High Court.

The fact that the complainant heads the District Vishakha Committee against sexual harassment is an indicator of the alarming gaps in the way the Sexual Harassment of Women at Work Place Act, 2013 is being implemented in the country in general, and the judiciary in particular.